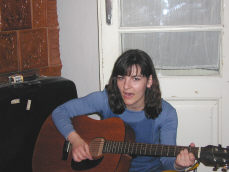 Ten years ago I began to serve the Lord working in an orphanage in Bucharest called “City of Hope” with the street children. I worked there for 4 years. In the summer of 1997 I met Carl Fox, when he was for the first time in Romania by then. A colleague from work, Daniel R. asked me if I knew somebody who can translate for Carl. In our church we have many young people who know English well, so I talked to Carmen G. and she was glad to help Carl with the translation. So the three children of whom I was taking care, Carl and the Americans that were with Carl and I visited the town. Because I am like the children for whom I worked (I don’t have a family. I am an orphan –my mother died when I was 10 years old) Carl was interested to help me, too.

Since then, in every year God blessed me through Carl and his family and I became Carl’s child from Romania. In 1999 God changed my place of work and I got to work in a place with very poor people who provided the food for children from one month to another. In the beginning I didn’t understand why I was where I was, but I understood that God wanted me there for a while. In the spring of 2001 I prayed that God would change my place of work and, like always, God acts in hard situations and He allowed me through Carl to receive money for the children each month. Since then God has helped us to live a normal life. We are very blessed.