Carl Fox ministered in the Ukraine in the Fall of 1993 with a brother who was teaching English using the Bible as a text book. As was (and is) his manner, Carl offered prayer where ever he was. When it became apparent people were being healed and delivered, people would bring others who were known to need prayer. A man was brought to him for prayer. As he felt led, Carl removed curses from the man in the name of Jesus Christ. Carl did not recognize the man when he showed up the next evening, he was so blessed. Through an interpreter, they told Carl that after he had removed the curses, the man went home and found his mother-in-law – who had been dehydrated, dying with a virus, and hadn’t been able to eat – was up making cabbage soup! She was feeling great and was just hungry. When they got up the next morning, his mother, who had been paralyzed for months from a stroke, was sitting on the edge of her bed working on getting her balance. When he arrived at his shop late, because no one had been doing business with him, there were people lined up waiting for him to open. Seeing such an about face concerning everything in these people’s lives after the curses were removed, Carl thought to himself, “I’ve got to learn about this,” but didn’t have time until after arriving home.

Turning Curses To Blessings — The Book.

The unexpected consequences of this event included an incident with the Ukrainian Army and trouble getting out of the country, two flat tires stateside on the way home, and Carl finding his business had been shut down  for days upon arriving home. Carl fasted and prayed until he received a word from the Lord. It was a single word, “Curse.” Carl and his partner went out to pray at one of Carl’s favorite places at that time, the sand dunes near Albuquerque, NM. Carl prayed in the name of the Lord Jesus Christ, asking God to remove all the curses he had picked up, and thanking Him for blessing them even though they were hurting and their business had been shut down on them. When they got back, after praying and praising God for two or three hours, the phone was ringing. Their business was flowing again! Get the book and learn more!

That incident started Carl on a quest with God to understand about curses and how they can be broken. He continued to pray and praise God in the mountains of New Mexico. He would ask God questions and receive answers. Once, when Carl was talking to God about curses and where they come from, God said, “Well, a curse that’s causeless cannot land. However, if you’re in disobedience, that’s when you’re open to being cursed.” God asked Carl if he ever met a Christian who always obeyed. Carl replied, “No, I have not, especially me.” Carl’s attention was directed to some buzzards circling over the canyon in front of him.  Later Carl found this in Proverbs 26:2: As the bird by wandering, as the swallow by flying, so the curse causeless cannot come.  The day before Carl taught a class on Turning Curses to Blessings the first time, he and a friend were up on a mountain praying and asking God for help, they both heard a voice behind them say, “Whenever you remove a curse, be sure to replace it with a blessing.” Carl didn’t have time to document this, but a friend called him that night and shared Deuteronomy 23:5: “But the Lord thy God turned the curse into a blessing unto thee, because the Lord thy God loved thee.” God is so gracious!

Over the next several years, Carl travelled all over the country and several foreign countries, teaching Turning Curses to Blessings and ministering healing and deliverance. By God’s grace, thousands have been healed of diseases and bad health conditions. Many have been delivered from oppression. Blind people can now see and deaf people can now hear. People have been healed of back problems, heart problems, emotional problems, and economic problems. In about the 1998 time frame Eli and Susanna Arvizu, moved by the vision of having the Turning Curses to Blessings teachings in written format, spent countless hours gathering together materials, transcribing the classes from tapes from classes Carl had taught, and pulling together the first draft of a manuscript of a book. The book Turning Curses to Blessings was published in 1999.

In the year 2000, Northwest Christian Bible Fellowship in Bellevue, WA, were gathering together materials to be used for teaching and discipling waves of new people that were prophesied to overwhelm the churches. As part of that effort, beginning with Carl’s notes, which consisted of verses of scripture, with notes and anecdotes interspersed, organized into 9 sections or “lessons,” we put together a Syllabus and Workbook designed to be used with the cassett tapes of Turning Curses to Blessings.

Turning Curses To Blessings – the live seminar is now available on compact discs (CDs). If you have not heard these teachings, it is well worth your time to listen to these teachings, at least once. Having heard him teach it, you can hear Carl speaking to you in his deep strong voice every time you read from the book. The book is written in Carl’s speaking style.  The Syllabus and Workbook has also been revised to match the CDs. The content is the same. Only the indexing is changed. The CD version is indexed in terms of Disc number, Track number, and Minutes:Seconds, instead of Tape number, Side number, and Minutes:Seconds. The indexing is provided to help you find a particular area of teaching you want to hear again. It allows you to insert the correct CD, select the correct Track number, and play or fast forward to the Minutes:Seconds where you want to start listening.

The Syllabus contains a list of scripture references in the order they will be covered, followed by workbook questions for each lesson. Some lessons contain suggested reading assignments from the book. The suggested assignments are chosen to complement the material covered in the lesson. Some assignments relate to the material covered. Others do not. Depending on how you schedule your seminar, a session may end on a negative note. For these cases, we have attempted to provide suggested reading to bring the reader to a positive or blessed state. Don’t worry if you don’t get all the answers to the workbook questions. If you are in a class, you may pick them up from fellow students in discussion sessions. If you are doing individual study, you can stop, rewind, and replay. 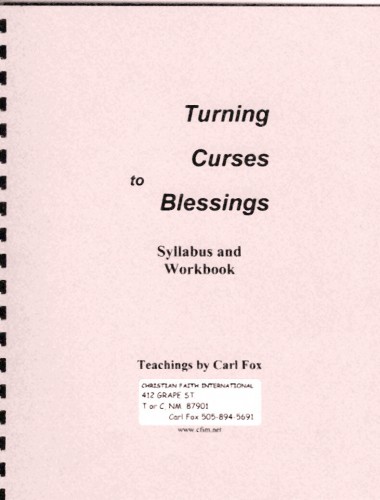 The Syllabus and Workbook is designed with the serious students in mind, particularly those who intend to study the material, apply the lessons in life and ministry, and in turn to teach others also. If you desire to be among those that believeth on me, the works that I do he shall do also; and greater works than these shall he do; because I go unto my Father (John 14:12), this is for you. We visualize this material being presented in small groups everywhere, even in troublous times, especially among 1000 faithful servants. It was once revealed to Carl, “If I had a thousand like you, I could change the face of your nation.” A mathematician who had heard of the formula: the square root of one percent, I calculated: A population of 300,000,000 probably has about 100,000,000 voters, one percent of which is 1,000,000, the square root of which is 1,000.